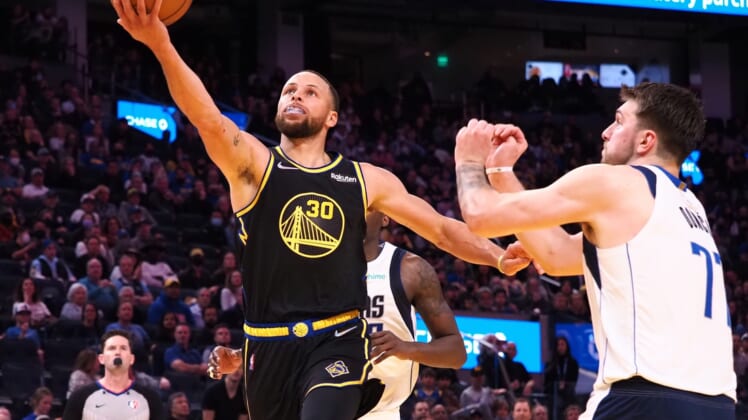 The Golden State Warriors will try to shake off a recent lull on Tuesday when they open a four-game road swing in Minneapolis against the Minnesota Timberwolves.

Golden State dropped its third decision in the past four games on Sunday, 107-101 to Dallas in San Francisco. The Warriors led throughout, building an advantage of as many as 21 points, until the Mavericks went on a 26-3 run in the fourth quarter.

Dallas did not hold its first lead until 3:21 remained in regulation but never trailed again from that point.

“It’s actually good to go through and feel it because this is what it feels like in the playoffs, when you’re playing against a really good team,” Golden State coach Steve Kerr said postgame.

The loss was the Warriors’ first in two games since returning from the All-Star break but was their fifth in the last seven games dating back to Feb. 9. Golden State dropped 4 of 5 going into the break.

The Warriors shot 39 of 91 (42.9 percent) on Sunday, making it the fifth time in their past seven games they shot 46.2 percent from the floor or worse. Jordan Poole struggled to an 0-of-7 night against the Mavericks.

“For him to be who he wants to be in this league, I think he has to have a little versatility in terms of being able to play different styles,” Stephen Curry said of Pole. “Sometimes starting, sometimes off the bench, sometimes (playing) 30 minutes, sometimes 15.”

Golden State has been without Draymond Green since Jan. 9 and Andre Iguodala since Jan. 21 save a brief appearance against the Oklahoma City Thunder on Feb. 7. Both are recovering from back injuries.

Klay Thompson missed Sunday’s game with an illness, and will remain sidelined on Tuesday. Thompson returned to the lineup Jan. 9 for the first time since the 2019 NBA Finals and has appeared in 17 games this season.

Minnesota welcomes Golden State to town for the second half of a back-to-back. The Timberwolves won Monday night in Cleveland, 127-122 over the Cavaliers.

D’Angelo Russell, who played 33 games for Golden State in the 2019-20 season, scored a team-high 25 points for Minnesota. Anthony Edwards, Karl-Anthony Towns and Jaden McDaniels all scored 17 points in the win.

Towns, winner of last week’s 3-Point Contest in Cleveland, hit what proved to be the game-winning 3-pointer with 12.4 seconds to go in regulation.

“I feel tremendously confident,” Towns said in his postgame interview with Bally Sports North. “I’ve said it before, I’ll say it again: (When the) game’s on the line, (No.) 32 feels like he can make any shot in the fourth (quarter) … When I shot it, I started hopping. I already knew it was in.”

Russell is averaging 27.7 points through the Timberwolves’ three games since the All-Star break.

Minnesota has won 9 of 13 since Jan. 30 to match its season high at four games above .500. Tuesday’s matchup is the last between the Timberwolves and Warriors in the regular season. Golden State leads the series 2-1, with the home team winning all three matchups.