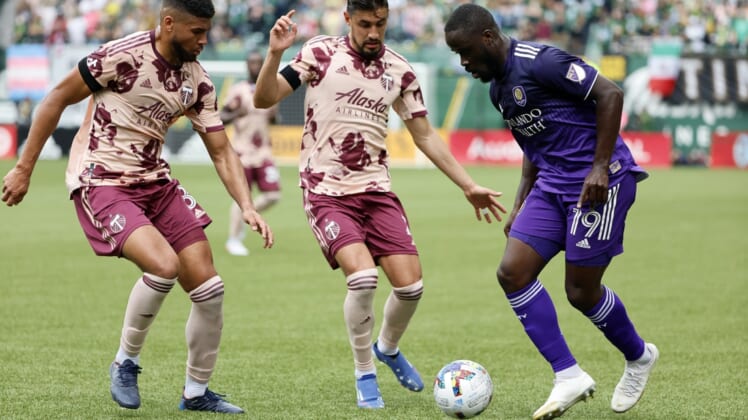 The host Portland Timbers got on the board via Cristian Paredes’ penalty kick in the 80th minute and forced a 1-1 draw with Orlando City on Sunday afternoon.

The Timbers looked finished with 12 minutes and injury time left. They trailed by a goal and lost a player on a second yellow card, forcing them to finish the match with 10 men.

Portland (1-1-3, 6 points) was without center back Bill Tuiloma, who was with New Zealand on international duty. The Timbers missed him in the box on offense and manning the middle on defense.

The middle was where Orlando (2-1-2, 8 points) hurt Portland on Sunday. Alexandre Pato was the give on a give-and-go with Junior Urso, who sailed through the box untouched and scored an easy goal in the 52nd minute.

The Timbers showed life down a goal when impact player Sebastian Blanco, troubled by a nagging knee injury but deemed fit enough to play, entered as a substitute in the 62nd minute. Blanco made several quality runs, but then the Timbers went down a man in the 78th minute when defender Josecarlos Van Rankin was carded.

Paredes drew a foul in the box for a penalty shot a minute later, when he was tripped by Orlando midfielder Andres Perea, and he rolled in the kick in the 80th minute.

Timbers midfielder Eryk Williamson — who suffered a torn ACL last August and was lost for the rest of the season and the start of this one — made his return to the pitch in a game as a late substitute.

Blanco got one last shot just before the final whistle, but he didn’t get everything on it and Orlando keeper Mason Stajduhar made the save. Orlando collected four points from back-to-back West Coast games.

The Timbers had a good chance in the first half, when Van Rankin lofted a cross toward the net. Paredes was waiting but couldn’t get a clean and direct header on goal. The ball bounced wide.