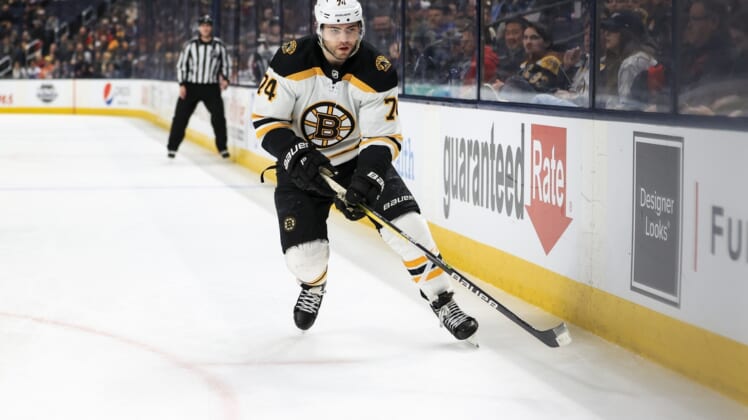 The Boston Bruins, who have 10 wins in their past 12 games, get another golden opportunity to collect two points when they face the struggling Red Wings in Detroit on Tuesday.

The Bruins (44-20-5, 93 points) swept a home-and-home set with the Columbus Blue Jackets in their past two contests, though they required overtime to win the rematch 3-2 on Monday in Ohio.

Jake DeBrusk was the offensive star on Monday, scoring two goals, including the game-winner at 1:03 of the extra session. His regulation goal came on a breakaway.

“I was happy to bury that,” DeBrusk said. “I had three breakaways on th (Blue Jackets goaltender Elvis Merzlikins) and hadn’t scored one.”

The hot streak has moved Boston into a third-place tie with the Tampa Bay Lightning in the Atlantic Division. DeBrusk has recorded at least one goal in five straight games.

The Bruins began a four-game road trip on Monday.

“It’s just one of those things where good teams find ways to win,” DeBrusk said. “It’s a fine line. It took until overtime, but these points are big for us now and we need all of them.”

Boston center Trent Frederic left the game early due to an upper-body injury.

The Tuesday game will be the finale of the teams’ four-game season series. Boston recorded a pair of 5-1 victories, while Detroit won the second matchup 2-1. The sides haven’t seen each other since Jan. 2.

Ottawa swept a home-and-home set against the Red Wings on Friday and Sunday, winning 5-2 each time. The Senators’ Mathieu Joseph recorded his first career hat trick in the first game, and Ottawa’s Josh Norris matched that feat in the rematch.

“Guys are frustrated, it just hasn’t gone the way any of us wanted to go, since even before the trade deadline,” Detroit captain Dylan Larkin said. “We’ve had the hardest schedule (in the NHL), but it’s frustrating as it can be.”

The last time they faced the Bruins, the Red Wings were hopeful of making the postseason. Those dreams have been dashed over the past two months. Detroit hasn’t been over the .500 mark in terms of points earned since an overtime win against the New York Rangers on Feb. 17.

It’s likely the Wings will have a new coach next season. Some fans chanted “Fire Blashill” during the Friday home game, but general manager Steve Yzerman likely will wait until season’s end to determine the fate of Jeff Blashill.

“There’s no doubt that right now we’re beat down mentally,” Blashill said. “That’s not an excuse. We got to fix that, but that’s the reality of it.”