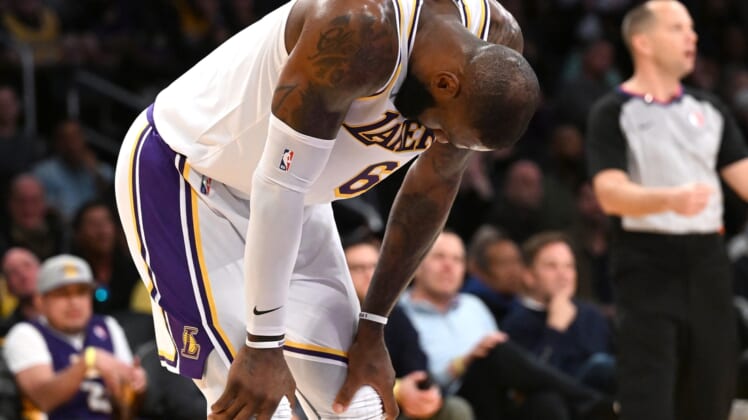 Feb 27, 2022; Los Angeles, California, USA; Los Angeles Lakers forward LeBron James (6) rests his hands on his leg during a time out in the second half against the New Orleans Pelicans at Crypto.com Arena. Mandatory Credit: Jayne Kamin-Oncea-USA TODAY Sports

The struggling Los Angeles Lakers will try to silence the home boobirds on Tuesday night when they host the surging Dallas Mavericks.

Los Angeles fans have made their displeasure known during a slump that has seen the Lakers lose nine of their past 12 games and 14 of 20, including a 123-95 blowout loss at home to the New Orleans Pelicans on Sunday night.

The Lakers trailed by as many as 32 points and committed 23 turnovers during a messy performance that included seeing an 11-point halftime deficit grow to 30 at the end of the third quarter.

As the jeers picked up, LeBron James (32 points) and Russell Westbrook (16 points), who each committed seven turnovers, exchanged words with fans during different parts of the game.

Westbrook offered an honest appraisal as to why the Lakers are struggling so badly.

“Teams are coming in, playing harder, and I believe that’s kind of their scouting report: Just play harder than them and see what happens,” Westbrook said. “And it’s working. Until we determine and have the determination that we’re not going to allow it, especially on our home floor, it will continue to happen to us.”

Los Angeles holds the third of the four Western Conference play-in spots, but the Pelicans and Portland Trail Blazers are just 2 1/2 games behind.

The Lakers fancied being one of the best teams in the West, not a ninth-place club trying to fight off two teams that are 11 games below .500.

There have been plenty of distractions lately — Westbrook’s inability to fit in, James’ comments about finishing his career elsewhere with son Bronny and the uncertainty of when Anthony Davis will return from his foot injury. Veteran big man Dwight Howard said it’s time for the players to cast all the chaos aside.

“It’s real easy to give up, throw in the towel and say negative things,” Howard said. “But we’ve got to stay positive. We can’t sulk in defeat, and we can’t quit on each other. I know it’s been a very rough season, but I think that’d be bad.”

The Lakers will try to get back on the right track against the Mavericks, who are 7-2 in their past nine games.

Dallas rallied for a 107-101 road victory against the Golden State Warriors on Sunday, a game that saw the Mavericks outscore the Warriors 33-13 in the fourth quarter. Dallas trailed by as many as 21 before turning things around to improve to 3-1 on a five-game road trip.

“This was a character environment culture win for us in a sense that no one quit,” Mavericks coach Jason Kidd said. “Everybody kept fighting and we found a way to win. That’s what good teams do.”

Luka Doncic had 34 points and 11 rebounds against Golden State. Also playing a key role was recent acquisition Spencer Dinwiddie, who scored 10 of his 24 points in the fourth period.

“We were going to ride him, because he was going (good),” Kidd said. “He never asked to come out, which is kind of cool because all the point guards don’t want to come out.”

Dallas has a rematch against the Warriors on Thursday, when it opens a four-game homestand. The Mavericks are tied for fifth in the West with the Denver Nuggets, 2 1/2 games behind the Utah Jazz, a team they lost to on Friday and play again on March 7.

The Lakers beat the Mavericks 107-104 in overtime at Dallas on Dec. 15, the teams’ only other meeting so far this season. Doncic missed that game because of an ankle injury.