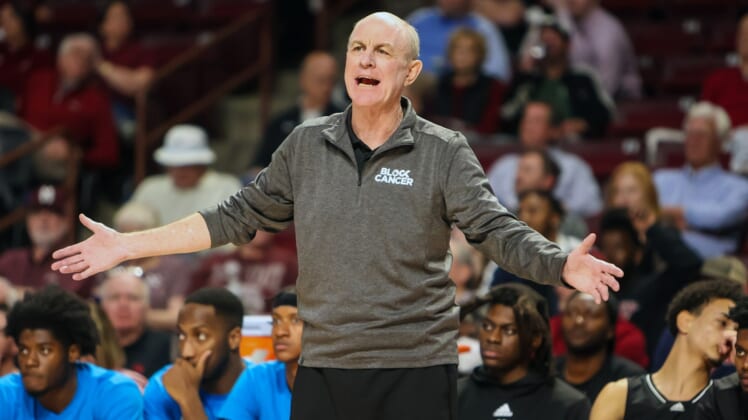 With Mississippi State denying reports that Ben Howland has been fired, the coach appears set to guide the Bulldogs in the National Invitation Tournament.

For third-seeded Mississippi State (18-15), the NIT kicks off with an opening-round game against sixth-seeded Virginia (19-13) at Charlottesville, Va., on Wednesday.

The NIT is a chance for Howland, who has guided the Bulldogs to one NCAA Tournament appearance in seven seasons, to put a positive spin on a disappointing year.

The matchup Wednesday features teams that saw their flickering NCAA hopes die with decisive quarterfinal losses in their conference tournaments.

In a 72-59 defeat to eventual Southeastern Conference tournament champion Tennessee, Mississippi State trailed by double-digit margins throughout the final 11 minutes.

Shakeel Moore had 15 points and six rebounds for the Bulldogs, who yielded 50 percent shooting to the Volunteers and forced just six turnovers while committing 13 giveaways of their own.

“We got tired. I thought that was evident tonight in the second half,” Howland said. “When you play back-to-back nights, it’s just hard. When you’re playing a team that’s one of the top 10 teams in the country that’s fresh, didn’t play (a day earlier), that’s the advantage of the double bye.”

In an Atlantic Coast Conference tournament quarterfinal, Virginia shot a season-low 34.6 percent from the field and posted a season-low point total in a 63-43 loss to North Carolina.

The Cavaliers missed their last seven shots of the first half as an eight-point deficit swelled to 33-13 at the break. In the second half, Virginia never cut the margin to less than 18 points.

“The margin of error for this team was probably a little smaller than most,” Virginia coach Tony Bennett said. “But it stings right now because we got humbled against a team that played really good basketball.”

The winner of the Virginia-Mississippi State game will face either second-seeded Texas State (21-7), the regular-season champion in the Sun Belt Conference, or seventh-seeded North Texas (24-6), which captured the Conference USA regular-season title.

This will be Howland’s third trip to the NIT in the past five years. The Bulldogs won three games to reach the title game last year, then fell 77-64 to Memphis.