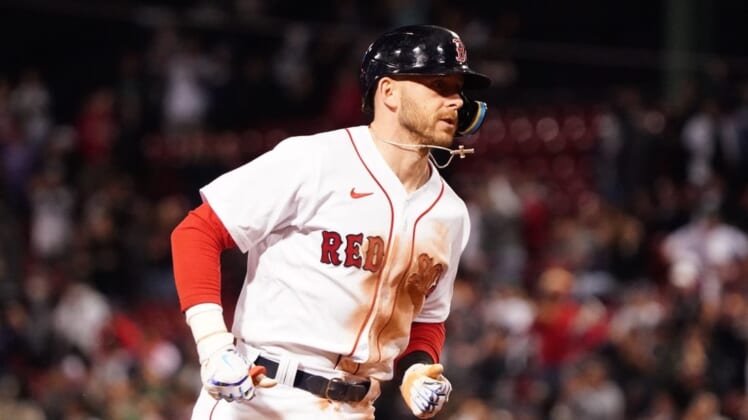 Tuesday’s 16-run barrage against the Chicago White Sox gave the Boston Red Sox 95 runs in their past 13 games.

Boston scored 95 runs in the first 29 games of the season.

Winners of six straight, the Red Sox hope to keep their offense clicking Wednesday night as they face the host White Sox in the middle game of a three-game series.

A 16-3 rout Tuesday saw every Red Sox starter collect at least one hit and score a run, while all but one had an RBI.

Enrique Hernandez homered on the first pitch of the game as part of a four-home-run game for the Red Sox. Trevor Story delivered a three-run shot in the first inning, his sixth homer in the past five games.

Story has eight home runs and 28 RBIs this month after having no homers and five RBIs in April.

While leadoff hitter Tim Anderson continues to boost the Chicago attack, collecting his fifth successive multi-hit game Tuesday, the White Sox’s offense took a hit before the game with the announcement that center fielder Luis Robert had landed on the COVID-19 injured list.

Chicago general manager Rick Hahn said Robert likely will miss the remainder of the series as well as the team’s two-game weekend set against the Chicago Cubs.

White Sox manager Tony La Russa kidded that his first reaction to the news of Robert’s impending absence was to jump into Lake Michigan.

“He’s so much fun to watch if you’re a baseball fan, and I am,” La Russa said. “I really hope for us and our fans it’s the quick one and we get him back in five or six days.”

Robert leads the White Sox with six home runs, while his 17 RBIs are two shy of Anderson and Jose Abreu for the team lead.

Left-hander Rich Hill (1-1, 3.90 ERA) is set to get the call for Boston as he tries to rebound from Thursday’s abbreviated start against Seattle. Hill exited after allowing four runs in the second inning of an eventual no-decision.

After Hill yielded five hits in the inning, including a three-run home run and two doubles, Red Sox manager Alex Cora wondered whether the veteran might be tipping his pitches.

“We’re looking. We always look,” Cora said. “It doesn’t mean that if you get hit, you’re tipping. But there’s a few things we saw that we have to correct. Probably, he was doing it before when he was being successful. Just a few things that we noticed, and we just have got to make adjustments.”

Hill is 0-2 with a 6.26 ERA in 18 career appearances against the White Sox, including four starts.

In his first outing since contending with COVID-19, Giolito last Wednesday took a no-decision against Kansas City after pitching five innings of two-run ball with seven strikeouts. He has struggled against the Red Sox in his career, going 0-1 with a 7.00 ERA in four starts covering 18 innings.