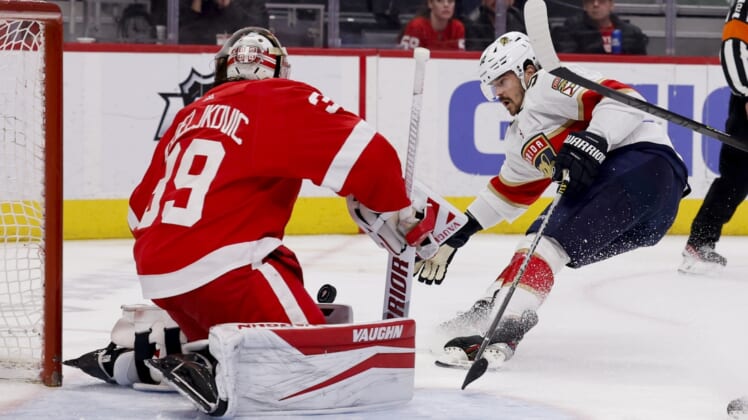 Spencer Knight made 33 saves for the Panthers, who have lost only once in their last 14 outings, The highest-scoring team in the league also received goals from Anthony Duclair, Sam Reinhart, Maxim Mamin and Gustav Forsling.

Pius Suter scored for the Red Wings, who were shut out by the New York Rangers on Saturday. Alex Nedeljkovic made 33 saves for Detroit (29-37-10, 68 points)

The Panthers have won the first three games of the season series and can complete a sweep with a victory in Florida on Thursday.

Florida had a 13-12 edge in shots on goal in the opening period but neither team scored.

Duclair broke the deadlock at 5:02 of the second period. He ripped a shot from the right circle off a Barkov pass that beat Nedeljkovic on the glove side. Montour picked up the second assist.

Reinhart scored his 28th goal just 90 seconds later to make it 2-0. Petteri Lindbohm flipped the puck out of his zone to Mason Marchment, who slid it to Reinhart. He also fired it beyond Nedeljkovic’s glove.

A steal by Lundell in the Red Wings’ zone led to his first goal. He gave the puck to Reinhart and Nedeljkovic made the save but Lundell collected the rebound and scored with 5:37 left in the period.

Just 28 seconds later, Mamin made it 4-0. He scored on a 2-on-1 situation off a feed from Eetu Luostarinen. Patric Hornqvist collected the second assist.

Lundell scored a short-handed goal off a nifty pass from Barkov 5:04 into the third period.

Suter prevented the shutout with his 14th goal off a Jakub Vrana pass with 7:56 remaining. Forsling scored just over a minute later with a blast from the point.