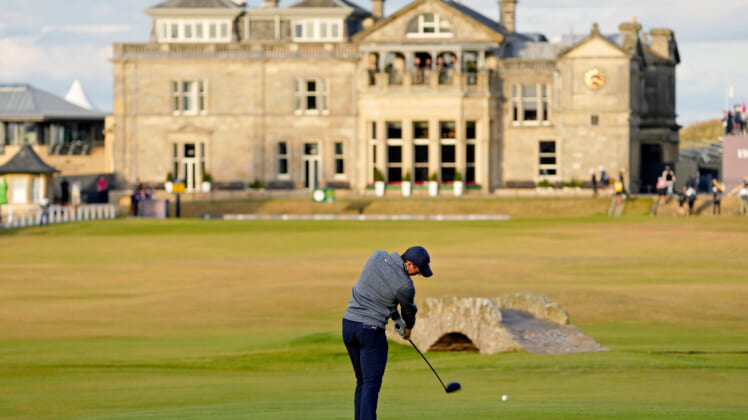 What a magical week this has been so far for the sport of golf. St. Andrews golf course in Edinburgh, Scotland, the birthplace of the sport, is playing host to the 150th running of the Open Championship. Every golfer leading up to this event was excited about the prospect of playing at the historic track.

Tiger Woods, despite not coming close to the cut line, walked up the 18th green on Friday with tears in his eyes as he took his cap off to the raucous crowd. It’s not very American for me to say, but this major seems to be bigger than the Masters when it is held at St. Andrews.

Outside of all the fanfare and whimsicality around the event, we are heading into the weekend with one of the strongest fields I can remember. Of the top 10 golfers currently slotted in the World Golf Rankings, only one player, and last year’s winner, Collin Morikawa, is set to miss the cut. We are in store for an amazing weekend of golf. And, the best part, the event is on all morning for the east coast on Saturday and Sunday.

The best in the world have proved it so far

Scottie Scheffler, Rory McIlroy, Cameron Smith, Viktor Hovland, Dustin Johnson, Tyrell Hatton, Patrick Cantlay, Adam Scott, Cameron Young, Talor Gooch and Sahith Theegala are the 11 golfers on top of the leaderboard as it currently stands. Five of these golfers are in the top 10 in the world, and all the rest are within the top 50, outside of Theegala, who at the start of the year was ranked 369th and is now 62nd. After this weekend, he will be firmly inside the top 50.

The outright leader going into the weekend is Cameron Smith, who fired an 8-under, 64 on Friday morning to take a two-shot lead into the penultimate day. The Players’ Champion has been electric this season, and his game has never been sharper. He leads Cameron Young, who has four top-three finishes this season and is on his way to a potential President’s Cup spot for Team America.

Young is only 25 years old. Scheffler, the world’s #1 player and Masters champion, is 26. Hovland and Theegala are only 24 years old. There is an excellent mix of young guns, major winners, and wily veterans at the top of the leaderboard to make the event even more interesting.

The shark in the room

It’s impossible to write a piece around golf without mentioning the LIV tour. Every week more and more players are leaving the historic PGA tour, for greener ($) pastures. It’s very hard to watch as no matter what happens, it seems to be diluting the sport and spreading the competition too thin. Too many good players have left, and now smaller events are losing tons of money.

It would be extremely interesting to see what the media and player reaction would be if someone from the LIV tour won this weekend’s event. Dustin Johnson, so far the biggest name to leave the PGA tour, sits four shots back of Smith on the leaderboard. This could be one of the last majors that the LIV tour players are allowed to play in ever. There is so much animosity between competing leagues, I am sure there will be some backlash if Johnson came out with a victory this weekend.

Despite the global politics around golf at this current moment, golf fans are heading into the weekend with an amazing slate of talent. Anything can happen on moving day, and we have all of the best players in the world in Scotland ready to compete.