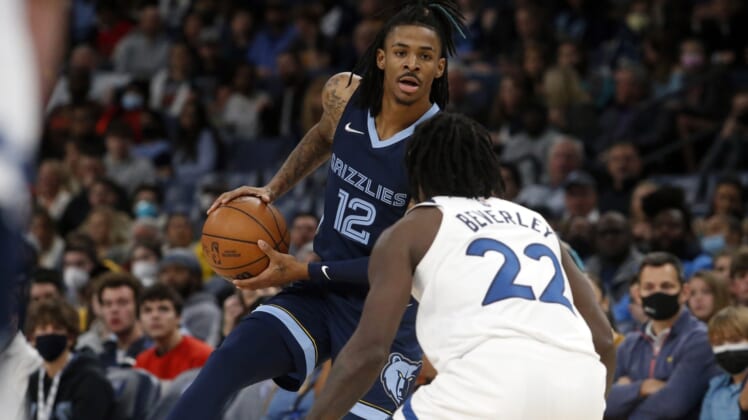 The West’s second and seventh seeds, respectively, split their four-game season series. But just because they are the higher seed in the series doesn’t make the Grizzlies a heavy favorite.

It was from long distance where the biggest difference in the season series existed.

D’Angelo Russell made 19 3-pointers in 41 attempts, Anthony Edwards was 14 of 32 from deep and three teammates connected on at least eight apiece, as the Timberwolves outscored the Grizzlies 204-111 on 3-pointers.

All four games were won by the home team, but neither of the victories came easy for the Grizzlies, who tied a franchise record in wins during their 56-26 season.

Memphis needed overtime for a 125-118 home win over Minnesota in November, then found itself down 106-105 with under two minutes to play before finishing strong for a 116-108 victory in January.

Minnesota’s victories, meanwhile, were by 138-95 in November and 119-114 in February. The clubs haven’t seen each other in more than seven weeks.

The Timberwolves enter the series with more momentum than the Grizzlies, having beaten the San Antonio Spurs 127-121 in a game of playoff implications last Thursday and then bested the Los Angeles Clippers 109-104 on Tuesday to earn the West’s seventh playoff seed.

The win over the Clippers landed Minnesota in the postseason for just the second time since 2004, an accomplishment Timberwolves players unabashedly celebrated immediately following the final buzzer.

“Man, I wanted this one so bad,” said fiery Wolves veteran Patrick Beverley, who was fined $30,000 for inappropriate language during the on-court celebration. “Another goal scratched off. I told you we were going to the playoffs. Most of you all, y’all looked at me like I was crazy when I first said that.”

The Grizzlies will be making their second straight trip to the playoffs, having been in the Timberwolves’ shoes last season as a play-in winner up against one of the top seeds. Memphis was beaten 4-1 by the top-seeded Utah Jazz in the first round last year.

The Grizzlies make a return appearance as a second-tier title contender, having run up the second-best record in the NBA behind the Phoenix Suns’ 64-18.

Having locked into its seeding early, Memphis took its foot off the gas a bit down the stretch, losing three of four, but used the time to get healthy for the most important part of the season.

“We know we’re supposed to be there,” star guard Ja Morant said. “We know we’re one of the top teams in this league, and it’s our job to go prove that. I feel like we have the right group to go win a championship.”

Morant averaged a team-best 20.0 points in the four games against Minnesota but shot just 3 of 20 on 3-pointers (15 percent) in the season series against the Timberwolves.