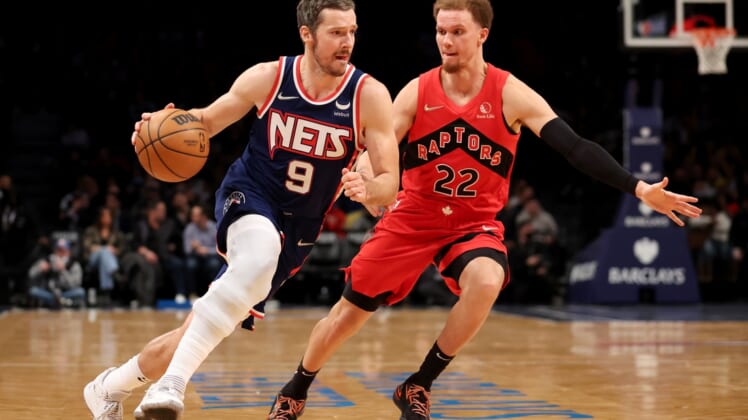 After taking two blowout losses, the Toronto Raptors reversed their fortunes by dominating the Brooklyn Nets on Monday in New York. The Raptors will seek a mini sweep in a rematch against Brooklyn on Tuesday in Toronto.

The short-handed Raptors defeated the depleted Nets 133-97 in the first of back-to-back games between the teams.

Playing without OG Anunoby (finger) and Fred VanVleet (knee), the Raptors were led by rookie Scottie Barnes, who matched his career best with 28 points.

The Nets were without Kevin Durant (knee), Kyrie Irving (ineligible because of COVID-19 vaccine mandates) and Ben Simmons (back), and the three will be sidelined again Tuesday.

“It was pretty sudden for the group,” Vaughn said.

The eighth-place Nets dropped two games behind the seventh-place Raptors in the Eastern Conference standings with the loss.

“We really respect (the Raptors), how they compete,” Nash said Monday before he found out he would have to miss the game. “They also happen to be right above us in the standings. It’s going to be a great challenge for us to find a way to compete in these two games and see what we can get out of it.”

The Raptors outscored the Nets 71-48 in the first half. Barnes scored 24 points before the break on 10-for-10 shooting from the field.

“I don’t think we ran any (plays) for him tonight,” Raptors coach Nick Nurse said.

Toronto returned from the All-Star break with two lopsided road losses — 125-93 against the Charlotte Hornets on Friday and 127-100 against the Atlanta Hawks on Saturday.

“We were just really locked in, really focused,” Barnes said. “We really wanted to bounce back after losing those first two games. Just really had to bring it (Monday), that was the main emphasis.”

“He got us organized,” Nurse said. “He got off the ball, he got it up the floor quickly, all those kinds of things that got the ball moving early, that’s just being a good leader out there and a good point guard.”

The Nets will try to turn the tables in Toronto.

“Yeah, we’re two games behind the seventh spot,” said Bruce Brown, who scored 14 points for the Nets. “So yeah, it’s huge. We’ve got to get this win in Toronto, especially since they came in here and did what they wanted in our gym. That’s unacceptable, so we’ve got to go out there and take it to them.”

The Raptors will be playing before a capacity crowd Tuesday with the relaxation of COVID-19 restrictions.

“We’re certainly looking forward to that,” Nurse said. “It just helps the overall vibe and our overall mood and our overall energy throughout the game, and I think we could use that.”

They also could use Anunoby and VanVleet back in action, but there is no definitive schedule for their return.

“I think the main thing with both Fred and OG is that they get better,” Nurse said. “We’ve got to find a path to get them healthy. Getting them as close to 100 percent as possible (is the goal). There are always guys that are playing through lots of things on lots of teams, including lots of our other guys.”