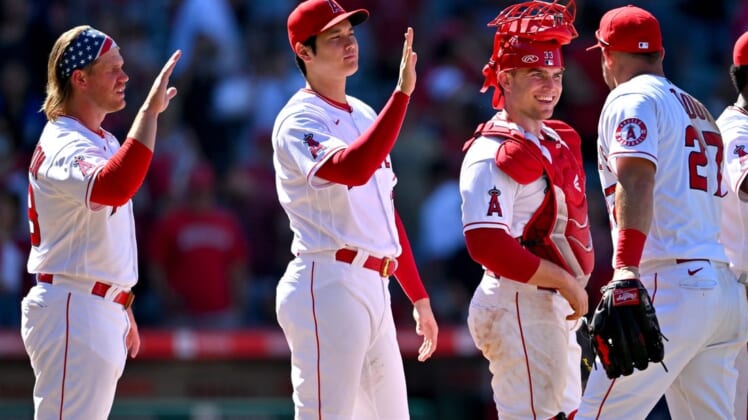 David MacKinnon’s two-out RBI single in the seventh inning snapped a 1-1 tie and lifted the Los Angeles Angels to a 2-1 victory over the Seattle Mariners in a fight-marred game Sunday afternoon in Anaheim, Calif.

The fight took place in the top of the second inning when Angels pitcher Andrew Wantz hit the Mariners’ Jesse Winker with a pitch on the right hip. After taking a couple of steps toward the mound, Winker then moved towards the Angels dugout. Wearing a cast on his surgically repaired right wrist, Anthony Rendon met Winkler with an open hand to the face and both benches and bullpens emptied as several skirmishes broke out.

The game resumed after an 18-minute delay, but with several ejections, including Angels interim manager Phil Nevin and Mariners manager Scott Servais. Three players from each team were ejected — Wantz and relievers Raisel Iglesias and Ryan Tepera for the Angels; Winker and fellow outfielder Julio Rodriguez and shortstop J.P. Crawford for the Mariners.

DJ LeMahieu hit a tying two-run homer with two outs in the eighth inning and Aaron Judge hit a three-run walk-off homer in the 10th as New York went from potentially being no-hit for the second straight day to rallying for a victory over visiting Houston.

The Yankees gained a split of the series against the American League West leaders a day after Cristian Javier combined with Hector Neris and Ryan Pressly on a no-hitter Saturday afternoon. Both of the Yankees’ wins in the series came via walk-off hits by Judge, whose ninth-inning single won Thursday’s series opener.

LeMahieu tied the game at 3-all by lifting a 2-2 slider into the left field seats for his seventh homer of the season and the Yankees got their 10th walk-off win after Michael King (5-1) escaped a bases-loaded jam in the top half. New York’s first hit came with one out in the seventh on Giancarlo Stanton’s homer.

Chris Taylor came off the bench to get three hits, including the go-ahead RBI double in the 11th inning, to help Los Angeles rally late and beat host Atlanta.

Taylor doubled in a run with one out in the 11th and scored on Trea Turner’s single to center field to spark a two-run rally against reliever Darren O’Day (1-2). The winning pitcher was Craig Kimbrel (1-3). The Dodgers forced extra innings when they erased a 2-0 deficit in the ninth inning by scoring twice against Atlanta closer Kenley Jansen, who suffered his fourth blown save.

The Braves broke the scoreless tie in the sixth inning. Travis d’Arnaud led off with a double, went to third on Austin Riley’s grounder and scored on Marcell Ozuna’s two-out single to center.

Rookie catcher Nick Fortes hit a walk-off home run in the ninth inning to give host Miami a win over New York. It was the first career game-ending hit for Fortes, who was playing in just his 27th major league game.

Tanner Scott (3-2) pitched a scoreless ninth inning to earn the win. He stranded J.D. Davis at third base by striking out James McCann on a 3-2 slider to set up Fortes’ heroics.

Adam Ottavino (2-2) took the loss. He retired the first two batters in the ninth before Fortes belted a 0-1 slider to right.

Boston broke the game open with two runs in the sixth when Trevor Story’s bloop single scored J.D. Martinez and Xander Bogaerts for a 5-0 advantage. The hit deflected off the glove of a diving Ernie Clement in left field.

The Rays’ Isaac Paredes was 3-for-3 with two doubles, an RBI and a walk. Josh Lowe (RBI) and Yandy Diaz (double) had two hits for Tampa Bay, while Ji-Man Choi doubled in a run and walked twice.

Daniel Vogelbach hit a home run and Bryan Reynolds had an RBI single as the Pirates managed only six hits.

Nick Allen’s two-run single in the seventh inning proved to be the difference in Oakland’s win over host Kansas City.

Allen’s hit enabled Oakland to take the rubber match of the three-game series, giving the A’s their first series win since taking two of three games in Seattle from May 23-25.

The Royals, who had taken two of three games when the teams met in Oakland last weekend, haven’t won a series at home since taking two of three contests against the Minnesota Twins from April 19-21.

Cease allowed one run on four hits to continue a strong stretch that began in late May. Gavin Sheets homered to give an early lead to the White Sox, who snapped a four-game skid.

The Orioles loaded the bases with no outs without a hit in the ninth, with the first two batters reaching on errors before a walk was issued to Jorge Mateo. Jonathan Arauz then singled home a run. After pinch hitter Rougned Odor struck out, Cedric Mullins lofted a sacrifice fly. With runners on first and third, Kendall Graveman struck out Trey Mancini to end the game.

Rowdy Tellez belted a pair of two-run homers to power Milwaukee to a victory over visiting Toronto as the Brewers took the final two games of the weekend interleague series.

Tellez homered in each of the first two innings off Jose Berrios (5-4) as Milwaukee overcame Alejandro Kirk’s three-run first-inning homer.

Chi Chi Gonzalez, making his second start since being claimed on waivers from Minnesota, allowed three runs — all on Kirk’s homer — on four hits in four innings. Jandel Gustave (1-0) picked up the win with two scoreless innings.

Byron Buxton singled, doubled, tripled and scored three runs to help Minnesota to a win against Colorado in the rubber match of their three-game series in Minneapolis.

Max Kepler had two hits and two RBIs and Luis Arraez also had two hits and a run scored for the Twins, who have won three of their last four overall. Minnesota starter Joe Ryan (6-3) allowed three runs and eight hits in five innings. He struck out one and walked one.

Connor Joe, C.J. Cron, Brian Serven and Garrett Hampson each had two hits for the Rockies, who have lost five of six. Charlie Blackmon added a home run, his 12th of the season.

Brandon Drury tripled to spark a seven-run third inning and right-hander Tyler Mahle beat San Francisco for the first time in his career as Cincinnati capped a series win.

Nick Senzel went 3-for-3 for the Reds, who have won each of their last two road series 2-1 sandwiching an 0-6 homestand against the Milwaukee Brewers and Los Angeles Dodgers.

Mike Yastrzemski had the game’s only home run for the Giants in the fourth inning, a solo shot that was his eighth of the season.

No. 8 hitter Bryson Stott opened the inning drawing a walk and Matt Vierling followed with a single to center, bringing up Schwarber, who had an RBI double earlier to extend his streak of reaching base to 30 straight games. Schwarber went the opposite way for his 21st homer of the season and capped a four-RBI game from the leadoff spot.

Yu Darvish gave up three runs on seven hits and a walk in six innings with a season-high nine strikeouts for the Padres.

Visiting Chicago erased a 5-0 deficit to win for the third time in five games and take the weekend series 2-1 against St. Louis.

Homers by Brendan Donovan, Paul Goldschmidt and Juan Yepez in the third inning put the Cardinals up 5-0 and knocked Cubs starting pitcher Alec Mills from the game.

The Cubs tied the game 5-5 in the fourth inning. Willson Contreras drove home the tiebreaking runner with a single to decide the outcome.

Bell went 3-for-5 with an RBI and two runs. Cruz, a two-time All-Star in eight seasons with the Rangers, had two hits, three RBIs and a run. Jackson Tetreault (2-1), in his third big league start, was effective for six-plus innings, giving up one run on four hits with two walks and four strikeouts.

Washington struck for six runs in the opening two innings against Glenn Otto (4-3), who was making his first start since June 4. The Rangers right-hander had been on the COVID-19 injured list since June 10.

Daulton Varsho belted a three-run homer during a five-run sixth inning as Arizona snapped a five-game losing streak with a win over Detroit in Phoenix.

Carson Kelly also homered for the D-backs, who erupted for 13 hits after averaging 2.2 runs during their losing skid. Pavin Smith contributed a career-high four hits with three RBIs, David Peralta had three hits, and Josh Rojas had two hits and two runs.

Detroit tied the game at 6-6 in the top of the fifth on Eric Haase’s three-run homer off J.B. Wendelken (2-1), a 433-foot shot to left field. Arizona then drew clear with five runs in the sixth against Will Vest (1-2).