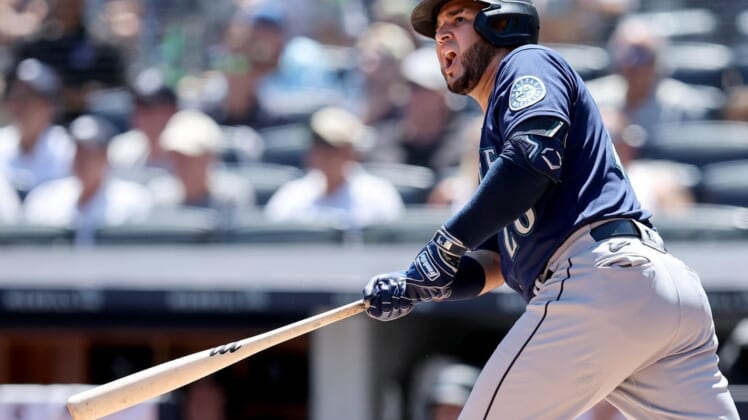 Luis Castillo pitched 6 2/3 innings in his debut for the Seattle Mariners, who slugged three homers in the first inning off Gerrit Cole and recorded a 7-3 victory over the host New York Yankees on Wednesday afternoon.

Eugenio Suarez hit a three-run homer and Carlos Santana hit a solo shot before Cole could record an out in the first, and Jarred Kelenic added a two-run shot after Cole got the first out.

Jesse Winker added a homer in the seventh as Seattle tied a season best with four homers.

Seattle’s early power display was more than enough for Castillo (1-0), who was acquired from the Cincinnati Reds for four prospects Friday night.

Castillo allowed three runs and five hits. He struck out eight and walked three on 109 pitches.

Seattle won a series from the Yankees for the first time since April 2016.

Cole (9-4) allowed six runs on seven hits in six innings. He struck out eight and walked one. He has allowed 14 earned runs in three starts since the All-Star break.

Kyle Higashioka hit an RBI double in the fourth and a two-run homer in the seventh as the Yankees lost for the 13th time in 24 games on a day when they rested slugger Aaron Judge.

After Adam Frazier singled and Winker walked to lead off the game, Suarez gave Seattle a 3-0 lead by hitting a first-pitch slider into the left field seats. Santana followed by lifting a 3-1 fastball into the right field seats, marking the second time Seattle hit back-to-back homers this season.

Cole allowed a single to J.P. Crawford before striking out Kyle Lewis. Kelenic made it 6-0 by hitting a 2-2 changeup to the short porch in right.

Castillo allowed a two-out single to Isiah Kiner-Falefa and was lifted after Higashioka homered. Ryan Borucki got the final out of the seventh, Matthew Festa tossed a 1-2-3 eighth and Paul Sewald finished up in the ninth.