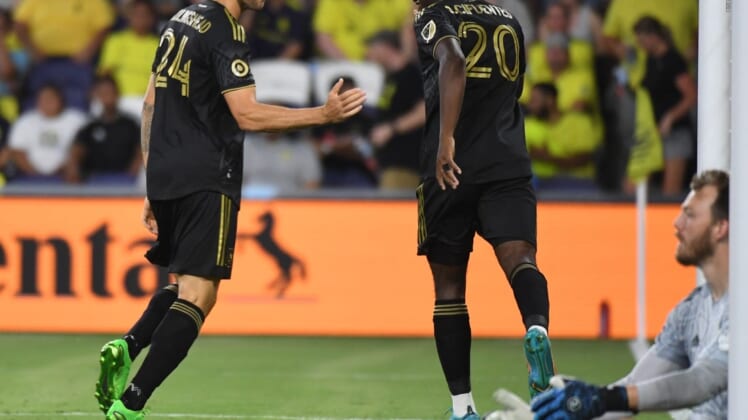 Jose Cifuentes scored the go-ahead goal less than a minute into the second half, and visiting LAFC pulled out a 2-1 victory over Nashville SC on Sunday night.

With the match leveled at 1-1 in the opening seconds of the second half, Los Angeles’ Ryan Hollingshead, off a brilliant placement from star teammate Carlos Vela, hit the post with his header.

But Cifuentes was there to pounce, and drive home the rebound to put the visitors ahead with his career-high sixth MLS goal of the season — and third in two matches.

Cristian Arango scored his team-leading eighth goal in the 27th minute for LAFC (13-4-3, 42 points), who regained the top spot in the Western Conference while improving to 6-1-1 over their last eight contests.

Meanwhile, Hany Mukhtar converted a successful penalty just before half to extend his Nashville record with at least one goal in five consecutive matches. Nashville (8-7-6, 30 points), though, is 1-2-1 at home in its last four matches after going the previous 24 league games there without a defeat.

In front of a spirited home crowd, Nashville was the aggressor early, and recorded the game’s first two shots on target. Though neither was trouble for LAFC keeper Maxime Crepeau to save.

However, it was the visitors, and their heap of talent, who struck first.

On a play that originated through Vela, the ball eventually made its way to Arango, who put a nifty move on Nashville defender Daniel Lovitz, then chipped it back into the near corner of the net just before the half-hour mark for his sixth goal in seven contests.

Nashville equalized on Mukhtar’s penalty for his 12th league goal of the season in the 43rd minute on the back of VAR. Initially, no foul was called when Ilie Sanchez pulled down C.J. Sapong in the box on a Nashville corner. However, the review saw otherwise, and Mukhtar converted off the post.