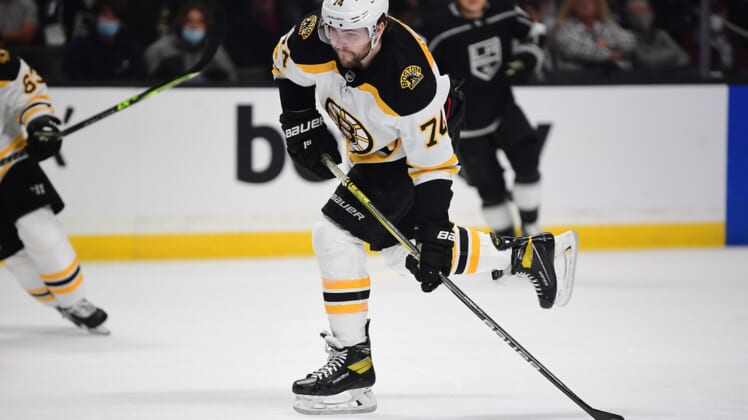 Jake DeBrusk might want to reconsider that trade request.

The Boston forward, who has been looking to get out of town since being a healthy scratch early in the season, is now starring on the Bruins’ top line with Patrice Bergeron and Brad Marchand.

Coming off a hat trick on Monday in the Bruins’ 7-0 road win over the Los Angeles Kings, DeBrusk will look to add to his recent goal tally when the Bruins visit the Anaheim Ducks on Tuesday.

In the past three games playing alongside two past All-Stars, DeBrusk has five goals and two assists. He scored twice, including the overtime winner, Thursday in a 3-2 victory at Seattle, his first multi-goal game in more than two years.

He had a natural hat trick, scoring the game’s first three goals, and also had an assist in the blowout at Los Angeles. It was DeBrusk’s first career hat trick and first four-point game.

“I’ve gotten some puck luck the last little bit, so it’s been trending in the right direction,” DeBrusk said. “It’s one of those things where it’s just the game of hockey, and you need bounces, whether it’s passes or goals or whatever.

“But an inch here, an inch there, it’s in the net or it’s not in the net. It kind of makes you giggle, but it’s a very rewarding feeling, because it’s one of those things where I personally had to wait for probably around three years to feel this kind of trend.”

The Bruins, who snapped the Kings’ five-game winning streak, are 3-0 on a season-high, six-game trip and have won five in a row overall, matching their longest run of the campaign.

Boston’s Erik Haula added two goals on Monday. Bergeron had a goal and two assists, Taylor Hall produced a goal and an assist, and Jeremy Swayman stopped 34 shots for his third shutout of the season.

“We were due for one of these nights where pucks go in the net,” Boston coach Bruce Cassidy said. “I don’t look at that as (an indictment of) them. They had an off night. We had a good night. For us, when we’re in these road trips, I thought it was probably one you circle in the middle of the trip. (When another) team is playing really well, you measure that game a little more.”

The Ducks were blanked 4-0 at home Sunday by the New York Islanders. Anaheim was without goalie John Gibson and forward Adam Henrique due to illness.

“We’re not sneaking up on anybody anymore,” Anaheim coach Dallas Eakins said. “They firmly know where our offense lies. It lies with a handful of guys.”

The Ducks, who are 2-5-1 in their past eight games, aren’t getting much help from their power play recently. They went 0-for-2 on Sunday and are 0-for-9 with a man advantage over the past three games.

“I thought the effort was there,” Ducks defenseman Cam Fowler said. “A couple of breakdowns and it’s in the back of our net. We couldn’t find a way to get one on the board. Obviously we want to win. It’s as simple as that: We just want to win.”

The Ducks and Bruins met Jan. 24 in Boston, with Ryan Getzlaf getting a goal and an assist in a 5-3 Anaheim victory. That was the last game for Boston goalie Tuukka Rask, who abandoned his comeback from offseason hip surgery and retired again.