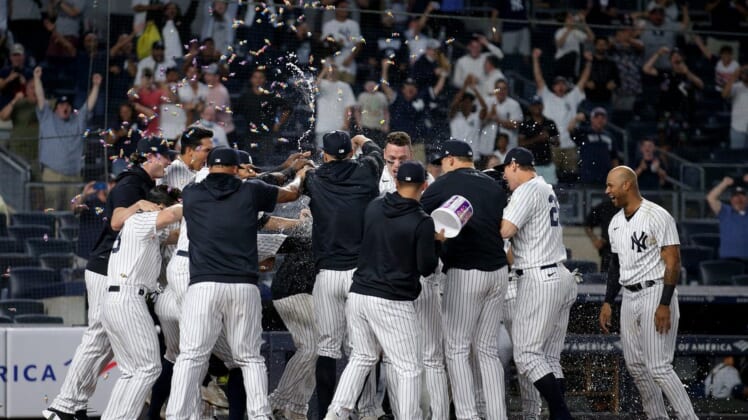 As midnight struck, Josh Donaldson gave the New York Yankees the type of win that highlighted their ascent to the best record in the American League earlier this season.

After Donaldson hit a grand slam in the 10th inning to beat the Tampa Bay Rays 8-7 on Wednesday, the Yankees hope momentum from the dramatic homer will continue Thursday night when they host the Toronto Blue Jays in the opener of a four-game series.

The Yankees haven’t won consecutive games since taking the first three games of a four-game series against the visiting Kansas City Royals from July 28-30. Since then they are 4-12, a stretch that has seen the Houston Astros overtake them for the best record in the AL.

New York is optimistic that Donaldson’s midnight blast off Jalen Beeks will spark another hot streak. The slam rescued the Yankees after Aroldis Chapman allowed two runs in top of the 10th inning following Scott Effross giving up one run.

“That’s a pretty good release of some joy coming out of that dugout, just with how it’s gone here lately,” Yankees manager Aaron Boone said. “For being the regular season and being in August, that was a special one.”

Donaldson, who is hitting .223 in his first season with New York, joined Babe Ruth (1925) and Jason Giambi (2002) as Yankee players to hit a walk-off grand slam in extra innings with the team trailing by three runs.

“I think that’s who we are as a team. I don’t think the last two weeks is who we are,” Donaldson said. “I think that’s more of a blip than anything. For us to be ourselves, go out there and compete to the last final out and pick each other up, that’s what we do.”

Toronto has dropped eight of 12 meetings with New York this year and is 2-4 in New York after winning eight of 10 games at Yankee Stadium last season.

The Blue Jays are 4-9 in their past 13 games and 20-12 under interim manager John Schneider.

Toronto avoided getting swept in a three-game series by the visiting Baltimore Orioles when it recorded a 6-1 win on Wednesday afternoon. George Springer keyed a six-run seventh inning with a pinch-hit RBI single ahead of two-run doubles by Santiago Espinal and Alejandro Kirk plus a bases-loaded walk drawn by Lourdes Gurriel Jr.

“Obviously it hasn’t been the best stretch for us,” Springer said. “I think everybody in that locker room understands what’s at stake.”

On Thursday, right-hander Frankie Montas (4-9, 3.59 ERA) will make his third start and home debut for the Yankees, who acquired him at the trade deadline from the Oakland A’s.

Montas started twice on New York’s most recent road trip, allowing six runs in three innings on Aug. 7 in St. Louis when he came off the bereavement list and two runs in five innings Saturday in Boston.

Montas is 1-1 with an 8.10 ERA in two career appearances against the Blue Jays. His only start against them came on May 3, 2021, in Oakland, when he allowed three runs and seven hits in six innings during a 5-4 win.

Berrios went 3-0 with a 3.00 ERA in six starts during July but was roughed up in outings against the Minnesota Twins and Cleveland Guardians to start this month.