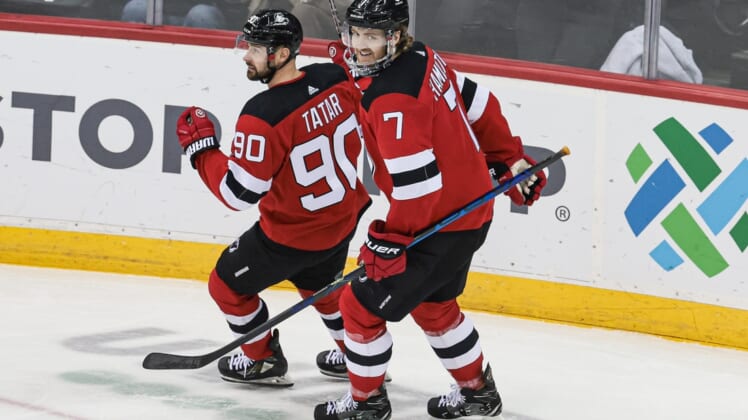 Consistency eluded the New Jersey Devils in February. Entertainment, though, was in ample supply.

The Devils will look to continue their offensive surge Tuesday when they visit the Columbus Blue Jackets in a battle of Metropolitan Division rivals.

The Devils will be completing a back-to-back set after rolling to a 7-2 win over the visiting Vancouver Canucks on Monday. The Blue Jackets are continuing a five-game homestand that began Sunday with a 3-2 loss to the Pittsburgh Penguins.

Six different players scored within the first 27 minutes Monday for the Devils, who outscored the opponents 39-37 in a month that began with New Jersey getting outscored by a combined 11-2 in losses to the Toronto Maple Leafs and Ottawa Senators.

The Devils bounced back from those games to score seven goals in consecutive wins over the Montreal Canadiens and St. Louis Blues before being outscored 10-5 in losses to the Penguins and the Tampa Bay Lightning.

New Jersey then returned from the All-Star break and finished the month by winning two of three, with Monday’s game capping a frenetic stretch that included a 6-1 win over Pittsburgh on Thursday and an 8-5 loss to the Chicago Blackhawks on Friday.

“We struggled a little bit defensively (Monday) I feel like,” said Devils center Jesper Boqvist, who scored in the second period. “But then it’s good to put up seven, I guess.”

“It makes it a lot easier when we score that many goals,” said Devils goalie Nico Daws, who recorded 36 saves against the Canucks. “I think we get up that early, I’ve got to make sure that the next one doesn’t go in. I can’t let the tide change.”

The Blue Jackets will be looking to prove Tuesday that their direction hasn’t changed. Columbus, expected to begin a rebuilding program under first-year head coach Brad Larsen, is on the fringes of the Eastern Conference wild-card race but has lost two straight following a four-game winning streak.

The Blue Jackets, who enter Tuesday 10 points behind the Washington Capitals in the chase for the final wild-card spot in the East, were blanked 4-0 by the Carolina Hurricanes on Friday before squandering a pair of one-goal leads Sunday, when Sidney Crosby scored the game-winner with 2:14 remaining.

Larsen challenged the goal, hoping replay would show that Crosby — who was battling for position in the crease with center Jack Roslovic and made contact with goalie Elvis Merzlikins after the latter raised his glove to knock down a shot by Kris Letang — interfered with Merzlikins. However, the goal stood upon review.

“You’d like to have a different outcome,” said Blue Jackets right winger Oliver Bjorkstrand, whose goal 4:43 into the first period was the 100th of his career. “Yeah, it’s tough. …

“I thought there was a lot of good parts of the game. We can take that and move forward. There’s some things we can adjust and be a little better. We just gotta be ready for the next game, though.”