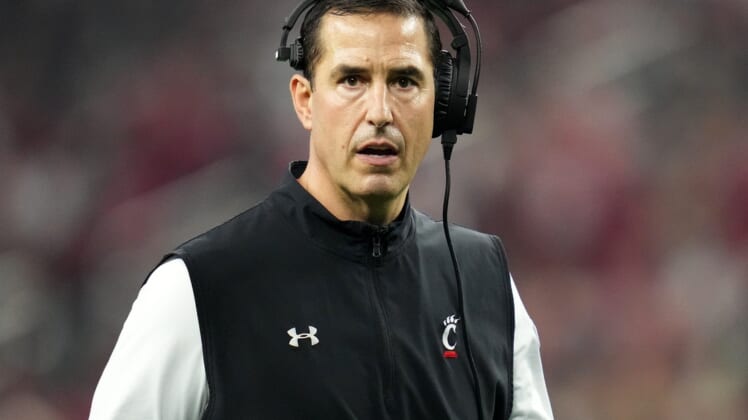 Cincinnati coach Luke Fickell received a two-year extension and a salary boost to $5 million Tuesday after leading the Bearcats to the College Football Playoff.

The university’s board of trustees approved the extension through 2028 and also increased the salary pool for his coaching staff to $5.2 million per year.

“Completing a contract extension for Coach Fickell was a top priority for our athletic department and university, and shows our commitment to growing this football program and taking it to the next level,” athletic director John Cunningham said in a news release.

“We believe we have the best coach in the country and certainly the best leader for our Cincinnati football program. He has proven that day in and day out by building a culture that consistently wins and breaks records, but most importantly develops men of great character, setting them up to succeed in life. I can’t thank President Neville Pinto enough for his leadership and work on getting this contract completed.”

Cincinnati won its first 13 games last season before losing to Alabama in the CFP semifinal at the Cotton Bowl. The Bearcats finished No. 4 in the final Associated Press Top 25 poll.

Fickell, 48, has a 48-15 record with four bowl appearances in five seasons. He was the consensus national Coach of the Year in 2021 after leading Cincinnati to a second straight American Athletic Conference championship.

“I appreciate the support of the leadership at the University of Cincinnati, including Director of Athletics John Cunningham and President Neville Pinto, as well as the Board of Trustees, our fans and our whole university and Cincinnati community,” Fickell said. “John and President Pinto share my vision for how we want to grow this program and take it to the next level, and that’s by investing in people — not just the head coach — and providing the necessary resources to prepare student-athletes to be at their best on and off the field.

“I’m truly honored to be the head coach of the University of Cincinnati and excited to keep working with our phenomenal student-athletes and administration to continue to develop our program. Now, it’s time to get to work!”