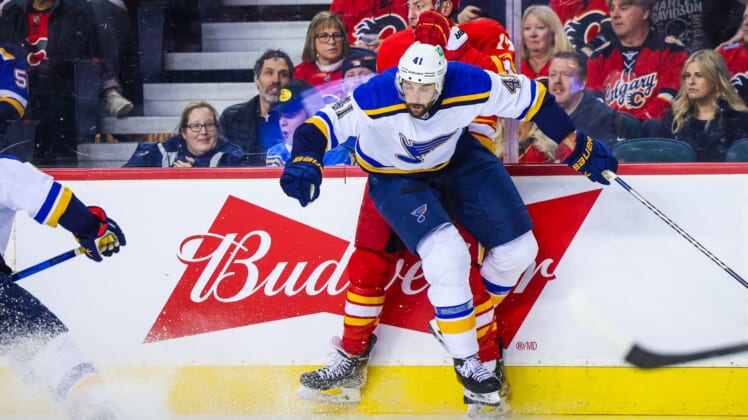 Nathan Walker scored the go-ahead goal late in regulation and goaltender Ville Husso made 39 saves to give the visiting St. Louis Blues a 6-4 victory over the Calgary Flames on Saturday.

Ivan Barbashev netted the winning goal with an empty-netter, the second of four goals scored in the final two minutes of the game.

Robert Thomas, Justin Faulk and Brandon Saad all collected one goal and one assist for the Blues (38-20-10, 86 points). Ryan O’Reilly also scored.

With overtime looming and the score tied 3-3, Thomas spotted Walker in the slot, and the forward found the mark with 1:56 remaining in regulation for his seventh of the season.

Noah Hanifin collected one goal and one assist while Johnny Gaudreau and Brett Ritchie added singles, and goalie Jacob Markstrom stopped 19 shots for the Pacific Division-leading Flames (40-19-9, 89 points), who have lost three straight.

The Blues were looking for a better start and received it when Thomas opened the scoring 54 seconds into the affair by deflecting Faulk’s point shot for his 15th goal of the season.

The Flames regrouped, took control of play and were rewarded when Ritchie netted his second of the season by pouncing on a loose puck at the 4:47 mark.

Then, Gaudreau collected his 32nd of the campaign at 12:49 by ripping a top-corner shot on a breakaway created by Mikael Backlund’s defensive play and pass up ice.

However, the Blues responded, too.

O’Reilly scored on a power-play opportunity — his 16th of the season — when he converted a shot from the slot with 2:29 remaining in the opening frame. Faulk then put the Blues ahead a second time at 13:35 of the second period by finishing a fantastic shift by O’Reilly’s line for his ninth of the season.

Hanifin’s seventh of the season midway through the third period, which finished a wild sequence and scramble, again tied the clash, setting the stage for the wild finish.

The Flames also announced that veteran center Sean Monahan would have season-ending hip surgery for the second consecutive year. Calgary has been fortunate on the injury front, but defenseman Oliver Kylington fell awkwardly into the boards the previous game and didn’t play, and then Ritchie left the game after Robert Bortuzzo landed on his leg as Hanifin scored.