The Cleveland Browns are ready to trade quarterback Baker Mayfield at any moment this summer, but financial hurdles remain in the way of a deal being made.

Cleveland shopped Mayfield around the league this offseason, even more after acquiring Deshaun Watson. The interest in leaving the Browns’ organization is mutual for the former No. 1 pick, but the path to a resolution seems weeks away.

A month after a trade came close during the NFL Draft before falling apart over financial differences, Cleveland doesn’t seem any closer to moving its highly-paid backup quarterback.

ESPN’s Jeremy Fowler reported Sunday on SportsCenter that the situation with Mayfield remains at a “standstill” entering June. It all comes down to money and what portion of the signal-caller’s salary other teams are willing to pay.

Fowler detailed that Cleveland is willing to eat approximately half of the Mayfield’s fully-guaranteed deal in 2022, but rival executives want a lot more covered.

There is no incentive for other teams to do Cleveland a favor by eating half of Mayfield’s salary. The Browns have zero leverage in this situation, experiencing a limited trade market with minimal draft-pick compensation as the return in any scenario.

Fowler outlined another scenario, but it’s unlikely to happen. Mayfield could agree to restructure his contract, turning guaranteed money into incentives he could earn as a starting quarterback. It would increase the odds of him being traded, but he likely has no interest in turning down guaranteed money and doing a favor for the Browns’ front office.

NFL general managers know they have the upper hand in negotiations. As a result, they aren’t willing to go past covering approximately ‘$5 or $6 million’ of Mayfield’s base salary in 2022. So, the Browns will need to show a willingness to pay at least $12 million this season to get Mayfield off the roster. 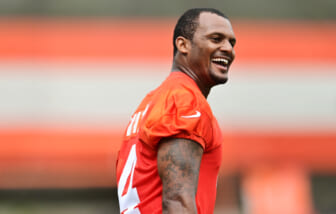 It’s not the ideal scenario for Cleveland, but it’s better than releasing Mayfield outright and absorbing the entire cap hit. However, the possibility exists that interested teams simply walk away from negotiations this summer to see if Mayfield is eventually cut.